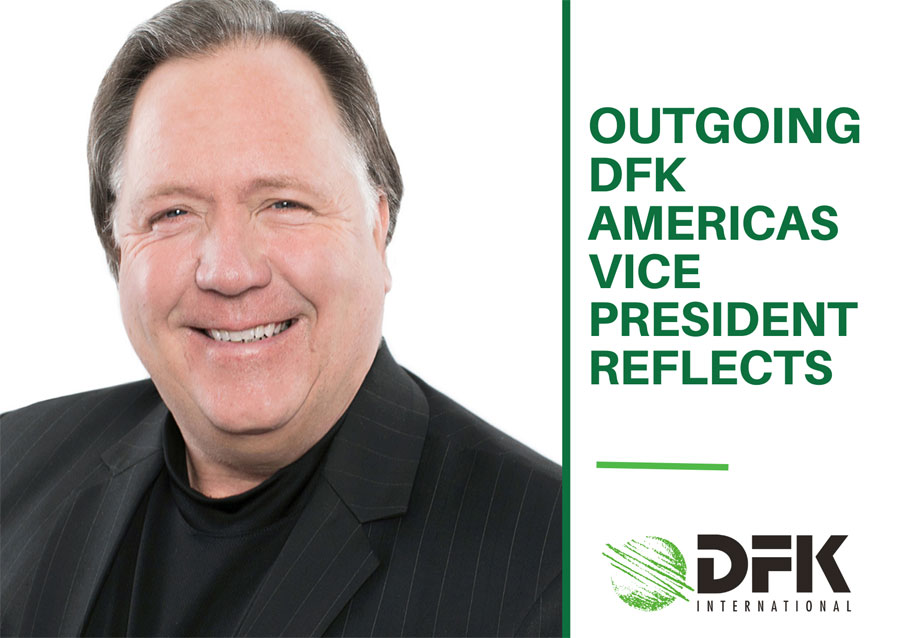 DFK International’s Vice President of the Americas has looked back on his two terms in the role as he steps down after six years.

Paul Panabaker, Senior Partner at Davis Martindale LLP, based in Ontario, Canada, has reflected on his time in the position, as well as his eight years serving on DFK International’s Board of Directors after officially stepping down.

He is succeeded by Nigel Jacobs, Chief Executive Officer of Taylor Leibow LLP Accountants and Advisors, based in Ontario, Canada, who has now taken the reins as the new Vice President of the Americas region.

Paul has a longstanding connection with the association having also served as President of DFK Canada and Chair of DFK’s International Marketing Committee.

Not only has he attended numerous regional and international conferences, as well as visited the offices of countless member firms around the world, he has also led DFK’s involvement in the Movember charity initiative since 2009.

Even during the pandemic, a ‘virtual Movember’ was held which saw member firms across the world raise men’s health awareness and an estimated CAD $30,000, which takes the total raised by DFK during the 11 years of Movember to more than CAD $600,000.

Paul said: “One of the main highlights has been meeting so many different people from member firms right around the world.

“I been given the opportunity to visit DFK offices in numerous countries, taking more than 250 flights, which has enabled me to experience some incredible cultures.

“There have been some fantastic conferences during my two terms, and there are certainly a few post-conference trips which stand out, including a three-day Halong Bay Vietnam cruise with 20 DFK friends representing nine countries, and visiting the Galapagos Islands following a Latin America conference in Quito, Ecuador.

“DFK has a family atmosphere, and I was fortunate to have my wife Cynthia travel with me on numerous occasions. My son Dean was also able to experience DFK in Hong Kong and my son Blake in Puerto Vallarta, Mexico, which gave them an excellent insight into everything that DFK stands for.

“Covid has certainly brought its challenges, and although it limited our in-person interactions, we have had virtual engagement with an expanded number of members through Zoom which has been very positive.

“I was disappointed to miss the opportunity to combine the North American and Latin American Conference with the International Conference in 2020 and 2021. The stage was set in Panama for an amazing delegate group from Canada, USA, Mexico, South and Central America to welcome our international friends.

“Ultimately the pandemic meant we had to cancel the event, but I hope that it is something we are able to achieve in future years.

“I will now continue my involvement on the DFK Canada Board, and Cynthia and I look forward to attending the 60th Anniversary conference in London 2022.

“I would like to thank DFK for the privilege to serve professionally and to all of the great members - now friends - for sharing these life experiences with me.”

Martin Sharp, Executive Director of DFK International, said: “It has been a pleasure to work with Paul throughout his time as Vice President of the Americas.

“He has put huge energy and commitment into the role and has travelled extensively in the region and beyond to meet with and interact with members, from as far south as Chile and Argentina, through Ecuador, Panama, Mexico, and the United States, as well of course his native Canada.

“As a board member, he has been an active and diligent member, attending meetings around the world, helping to ensure that association is well governed and acts always in the interest of its member firms.

“On a personal level, I would like to thank Paul for his friendship and candour and our many hours of enjoyable conversation in locations too numerous to mention.”

DFK International is one of the world’s leading associations of independent accounting, tax and business advisory firms that brings together strong national firms of public accountants to enable them to provide services of the highest professional standards to their clients. The association has been helping its Member Firms meet the needs of clients with international business interests for more than 50 years. Member Firms are chosen for the quality of service they provide in terms of both technical competence and service delivery. Members of the association that include DFK in their firm's name are classified as Network Firms in compliance with EU and IFAC requirements.

There are currently no events to display at this time.